On a whim a few weeks before my birthday back in September, I decided to apply for a position as a NASA Social attendee – someone that specializes in social media as a way to spread information to those who may not otherwise be informed. I thought the chances of being chosen would be slim since my blog isn’t exactly the most scientific on the internet (lol), but I do have a deep love of science fiction and all things space-related. So slim did I think were my chances that I don’t even think I mentioned it to Nick!

Imagine my surprise to get an email from a NASA employee, the wonderful Aries, letting me know that I am 1 of 25 people chosen to attend, and also asking for me to confirm my attendance to the event about a month later! We decided to get a few things done at once during the trip and while I was on my tour, Nick visited his parents (who live just 20 minutes from the NASA location, and he didn’t even know about the big cool rockets outside!) and collected some of the things we didn’t have room to bring last time we drove up – clothes I haven’t seen in 2 years! :O

Maryland was beautiful – we visited a couple of food places that had special stuff we can’t find a lot of in Florida like pupusas and these cheese steak subs Nick has been eating since he was practically a baby from this small bar that looks like a regular convenience store from the outside! The ladies there always recognize him (he hasn’t changed since he was an infant, I swear) and give me shifty eyes, haha. Oh well!

We stayed in a pretty normal Holiday Inn that had this super large bed and I left the trip with a lot of science knowledge and a primary goal of acquiring a giant bed similar to the hotel’s ASAP. Soon! The hotel was 5 minutes from the NASA place, which was really convenient — and on our last morning, I woke up to the TV we had left on the night before playing a rerun Buffy! (Be back before Dawn — the foreshadowing KILLS me!) 😀

We also visited a couple of awesome comic book shops and managed to grab some really cool things, but I’ll share that later! 😀 I’ll also maybe post some photos from Instagram during our trip, since a lot of these are just normal camera pictures!

The group of social media representatives met at the Goddard Space Flight Facility Visitor’s Center – a large area filled with amazing models, photos and displays of NASA and space-related memorabilia and technology. We could have easily spent an hour just going through the visitor center, and our tour was to include something even more in depth? I was already in heaven and hadn’t even signed in yet!

We each received informational materials for our tour and special NASA lanyards with accompanying name tags to identify us while on NASA property. Everybody signed up for a lunch and met one another – everybody was so nice and it was fun to find out how far others had traveled – some from the west and one from Florida, like me!

We boarded two buses that took us to the first of many of our tour buildings. The grounds are huge and involve many security check points, fences, hills and circular driveways. I honestly have no idea where we drove, haha!

We gathered in a large conference room with a 9+ screen hyperwall that a great group of scientists and engineers behind the MMS Mission used to guide us through exactly what the spacecrafts will do once they’re launched.

MMS’, or Magnetospheric Multiscale’s, purpose is to study magnetic reconnection – the process of the sun and Earth’s magnetic fields connecting and disconnecting, and the energy transferred during. The observation of magnetic reconnection and of space weather are instrumental in furthering our knowledge of space and how it affects us here on Earth – even in some of our daily used devices like our GPS navigation systems! You can read even more about the project here! 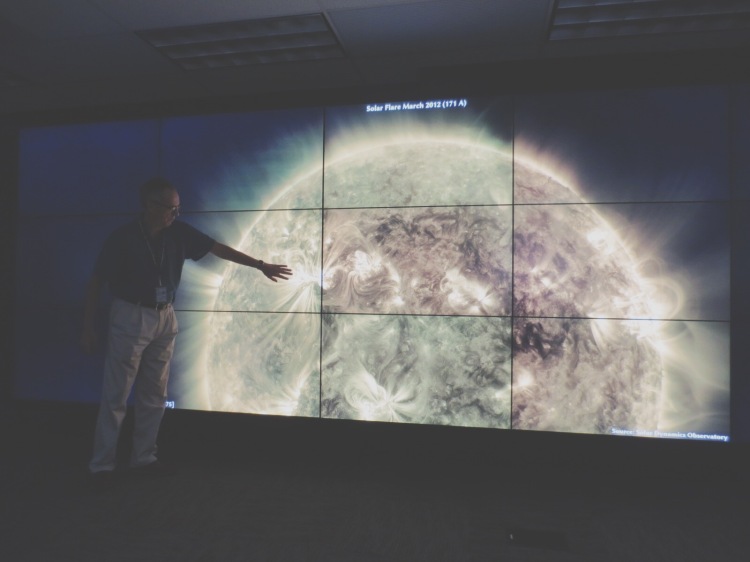 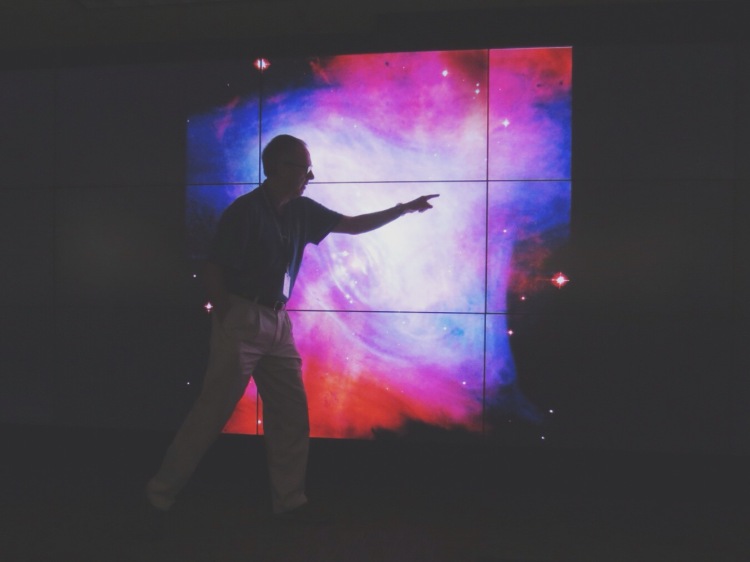 It was amazing to meet with the scientists, engineers, physicists and experts behind the MMS spacecrafts! Knowing how passionate some of the people are that are working on the expansion of our collective knowledge was inspiring and they were all so informative and friendly to us, answering any questions and laughing at our jokes! 😀

Next, we took a trip down the hall to an INCREDIBLE display of the MMS spacecraft made by a large group of middle and high school students. We also got to meet the students that built it, and learn about the challenges they faced and their favorite parts of learning about space!

In addition to an interest in furthering their presence in social media, NASA works closely with schools and STEM programs to help educate young minds about the benefits of working in those fields. Even during our lectures, a woman carried a small laptop that was live transmitting everything we were learning to a classroom of 5th grade students – and thanks to ever advancing technology, some of the students were even able to ask questions to these really patient, kind scientists – from their classroom! It was a really great experience that I’m grateful to have been a part of! 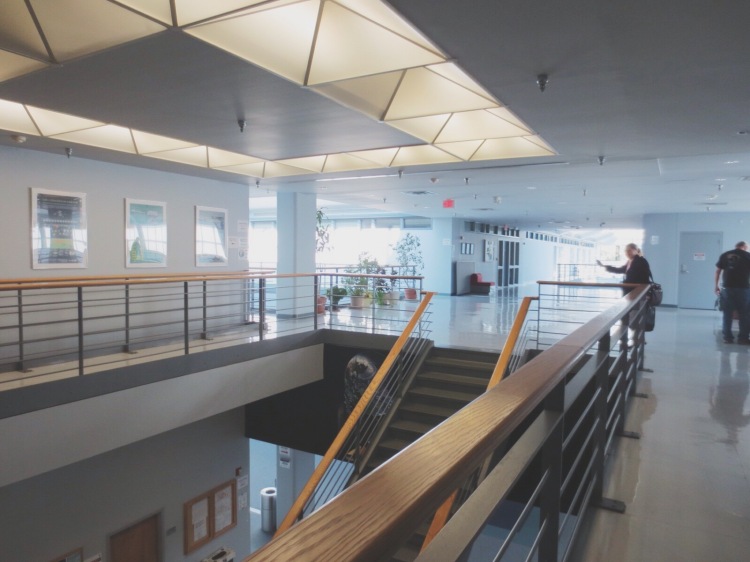 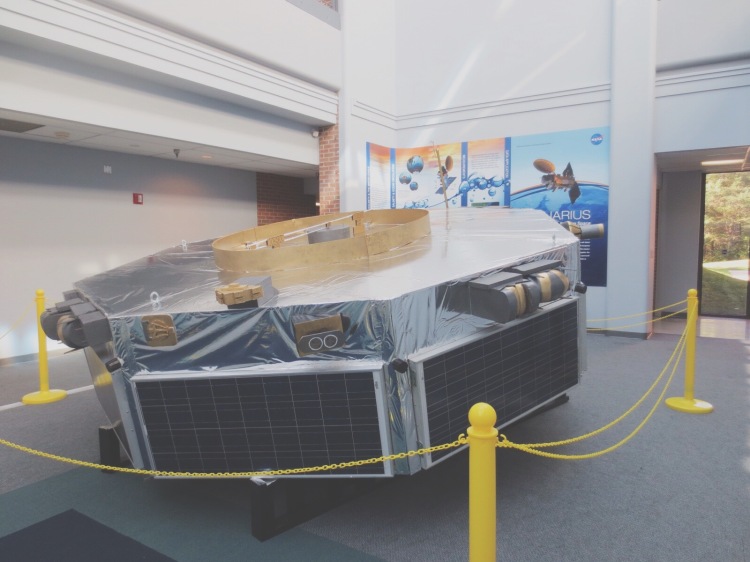 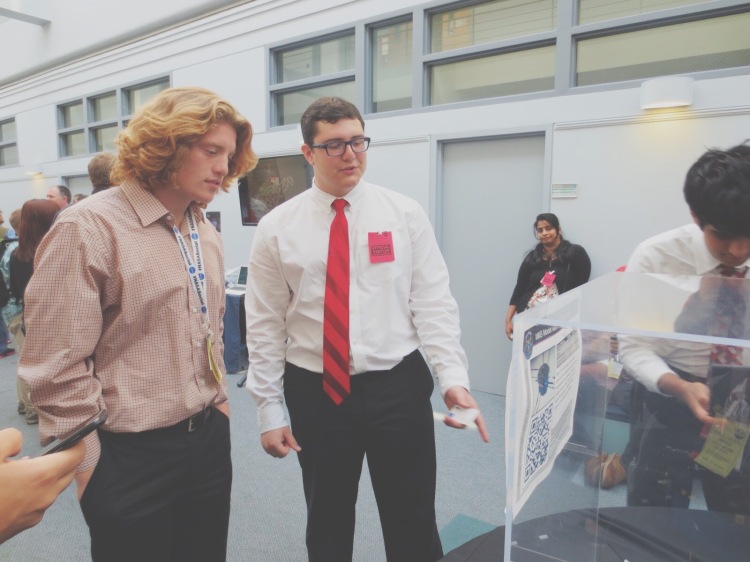 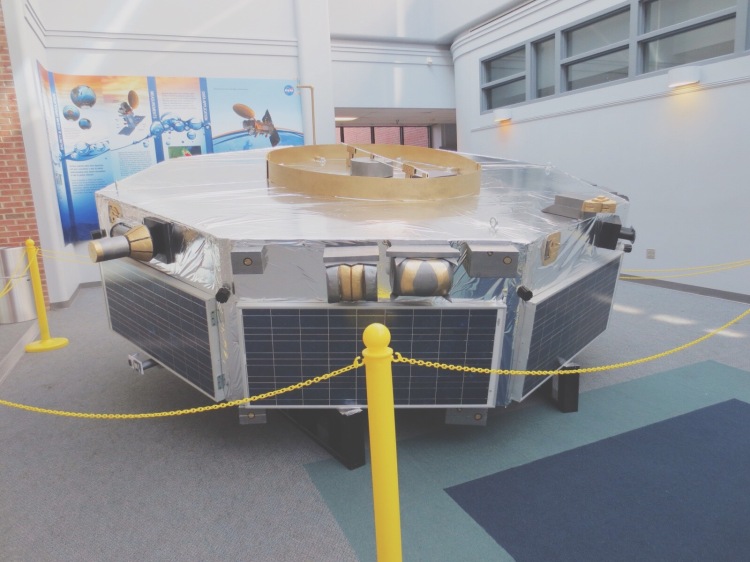 How awesome is this LEGO model?!

Next, we visited the ENORMOUS cleanroom containing actual parts being built of the James Webb Space Telescope!! IT WAS AMAZING! The people in white suits working on the mirror waved to us and it was really astounding to learn how much we’re going to learn once the telescope is complete.

From the Webbsite (see what I did there? I am so clever! Har har har), “It will cover longer wavelengths of light than Hubble and will have greatly improved sensitivity. The longer wavelengths enable JWST to look further back in time to see the first galaxies that formed in the early universe, and to peer inside dust clouds where stars and planetary systems are forming today.” HOW INCREDIBLE IS THAT?! And I got to see pieces of it being built, up close, in person! Have I mentioned how grateful I am?! 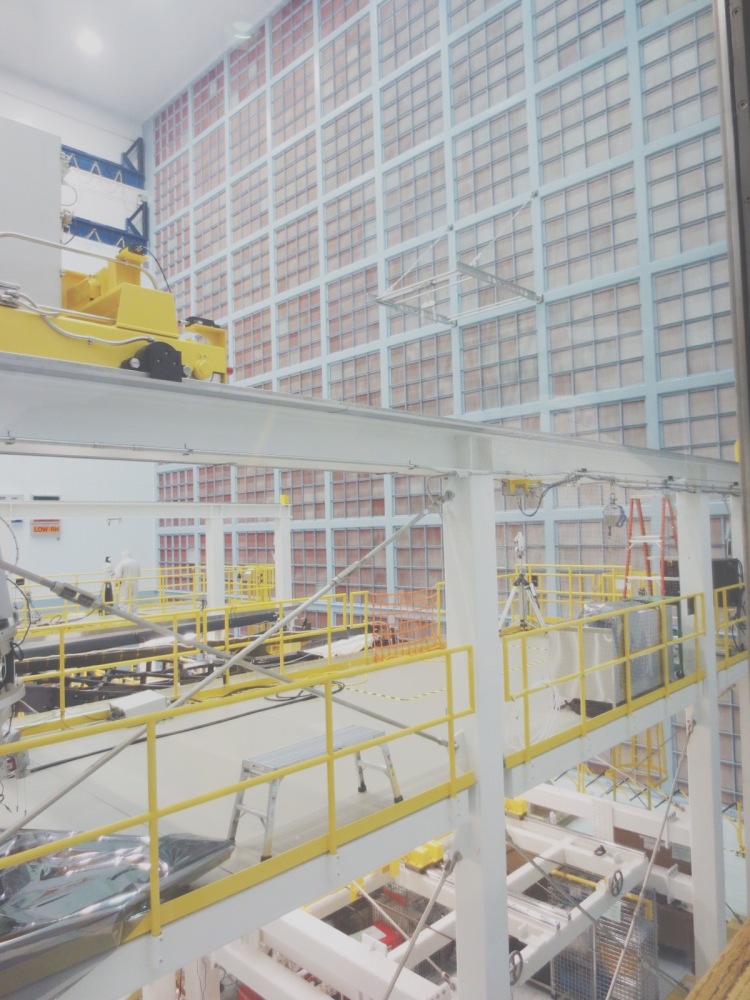 After the telescope viewing, we gathered in another conference room – this one with an actual conference table and over 15 monitors spread throughout the room! It looks like secret NASA headquarters and I was pleased. 😛

We analyzed some space weather data and learned about the different things we’ll be able to do once we have the results back from the MMS mission. We were shown footage of real solar flares and taught about how observing magnetic reconnection can help study space weather and the damages it can have to the earth and to the space crafts we send out trying to learn more about what surrounds us. 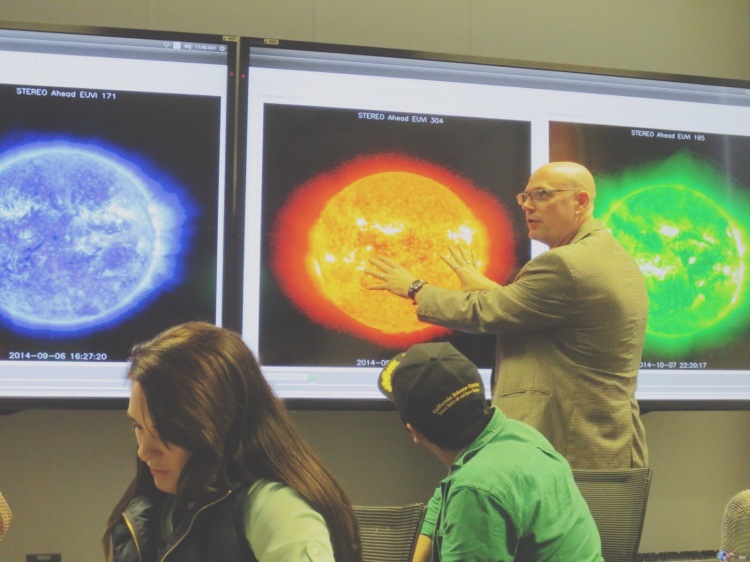 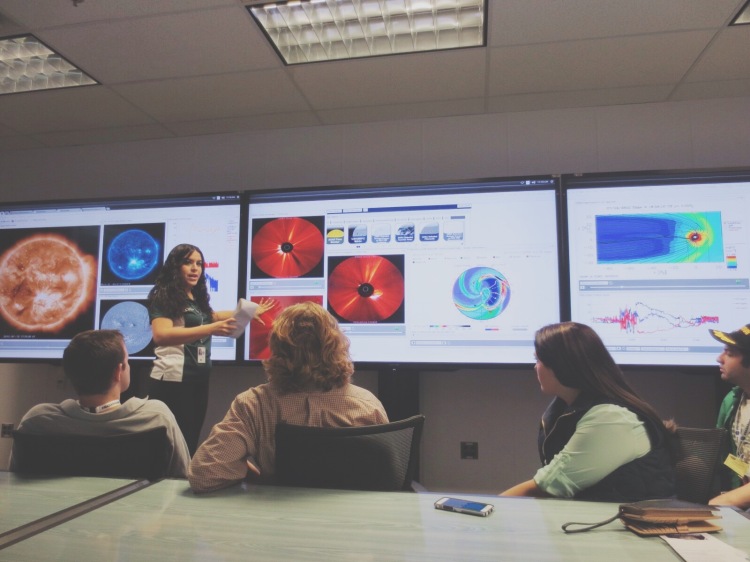 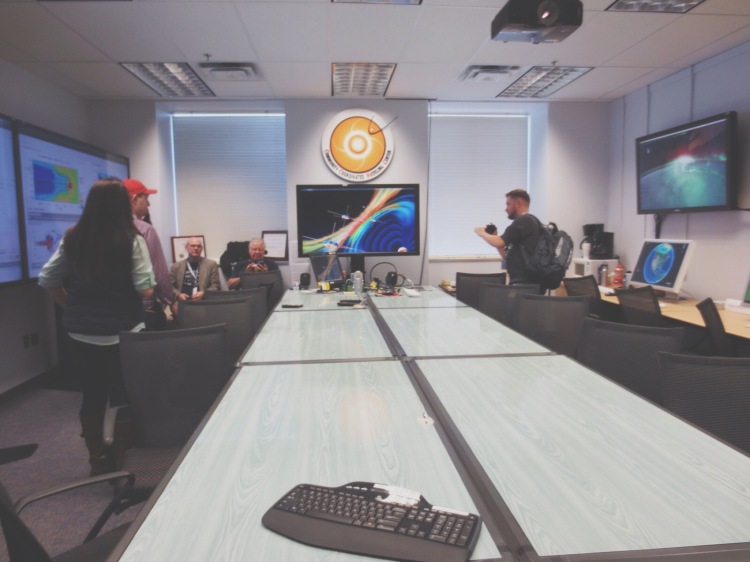 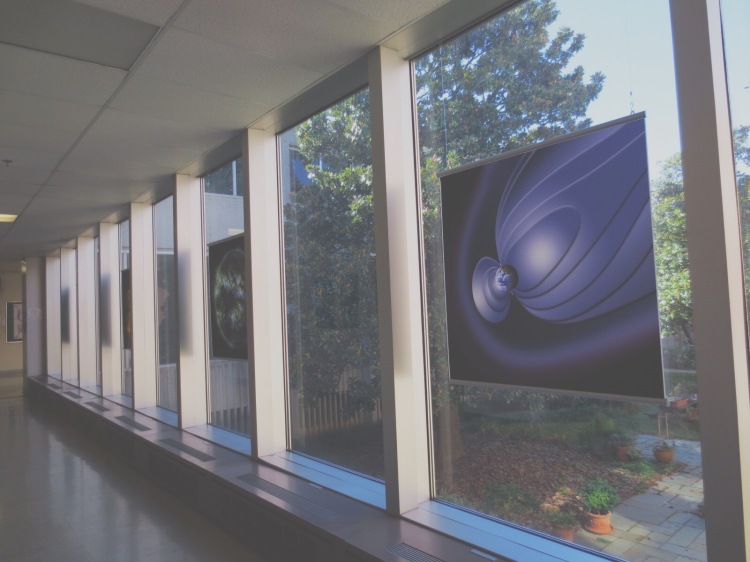 Even the hallways were awesome! Look at these great window hangings on our way to one of the tour spots above and the display below, showing the different things that have been worked on at the location: 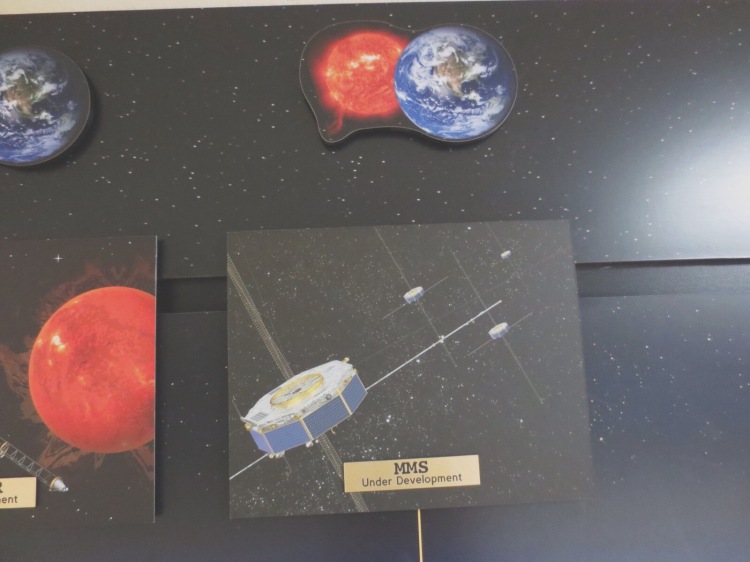 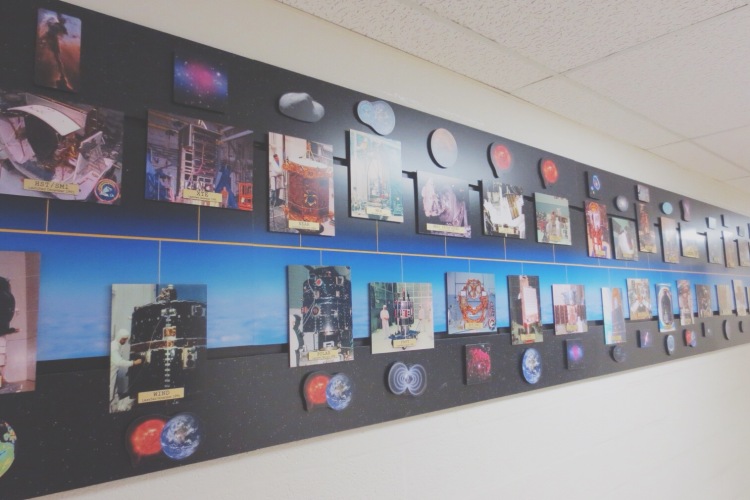 We went to lunch afterward and gathered in yet ANOTHER conference room (with a less appealing table :P), and we went around the room introducing ourselves and talking a bit about what we did for a living and how we came to be on the tour. There were so many different types of media folk – from a fashion photographer to a meat barbecue/grill expert who had been on national TV! Some of us were students, some video game vloggers, a couple of Twitter space-fans that had a following devoted to their NASA Social events. Everyone had a love of science and space exploration though, and all of us had the same giddy looks on our faces at everything we were being shown!

We were given a tour of more of the NASA facility, including the clean room in which the MMS spacecraft’s finishing touches were being finalized.  We saw a space environment simulator, vibration facilities and huge speakers – all sorts of awesome things related to the building and testing of technology that will be sent into space and used to further our understanding of our universe. I can’t even. 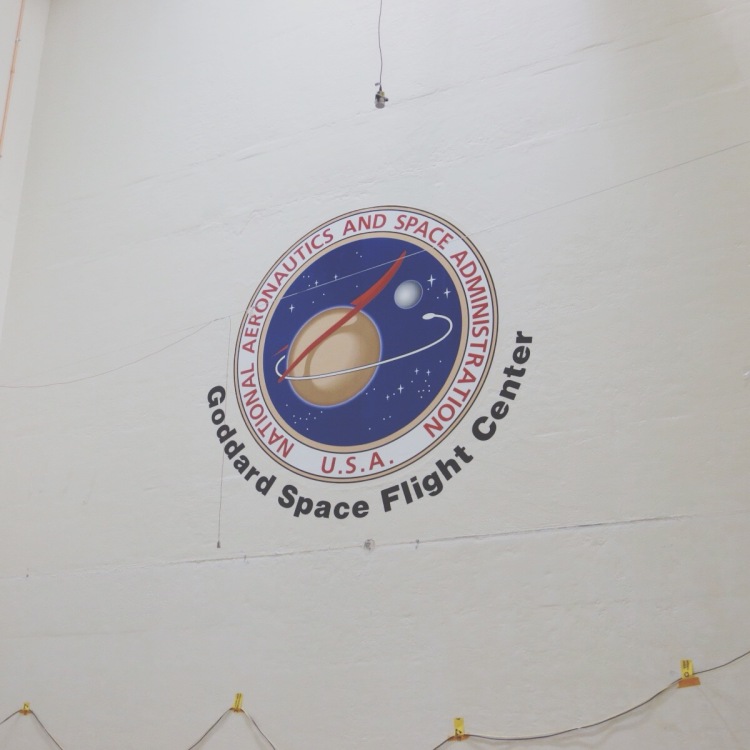 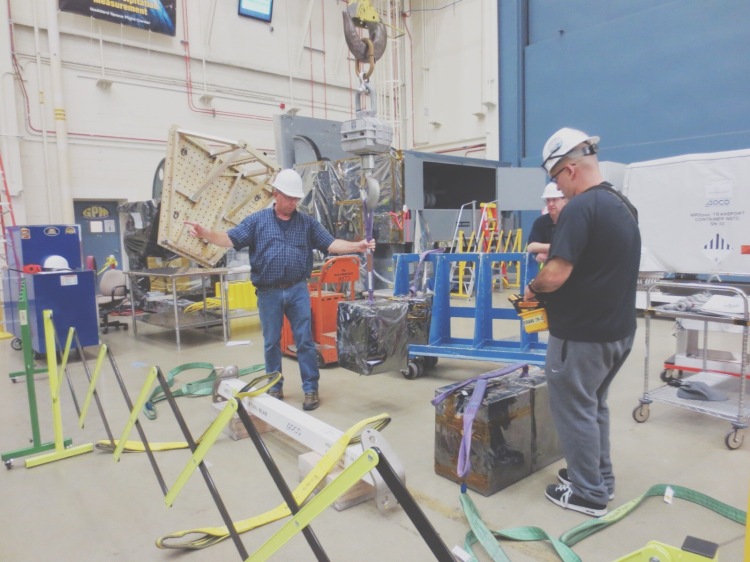 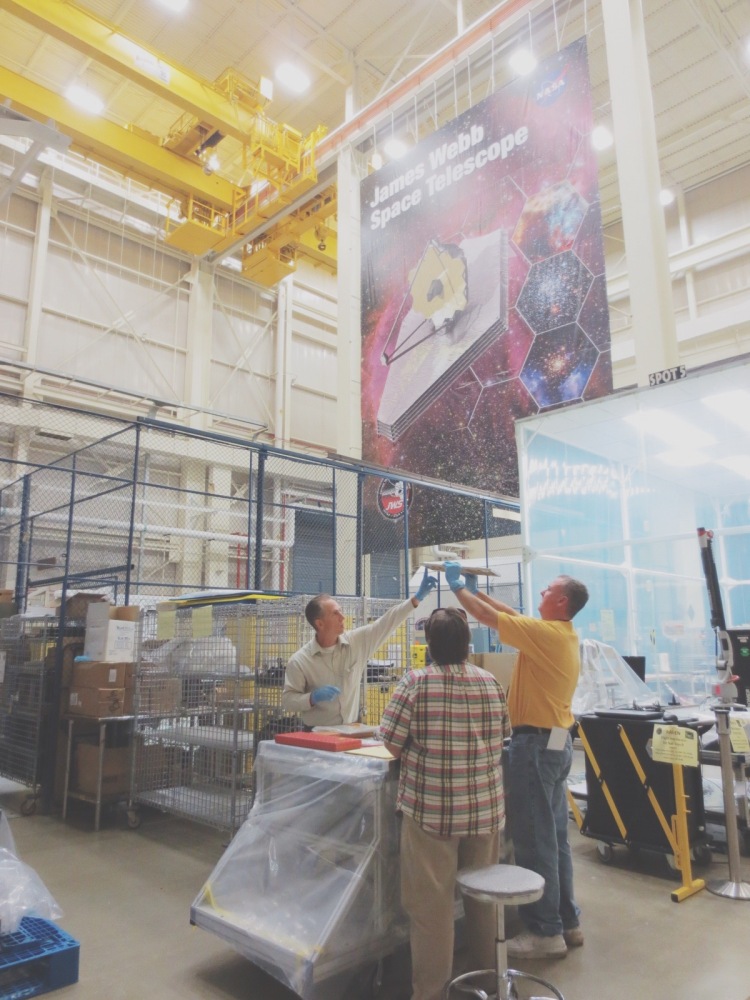 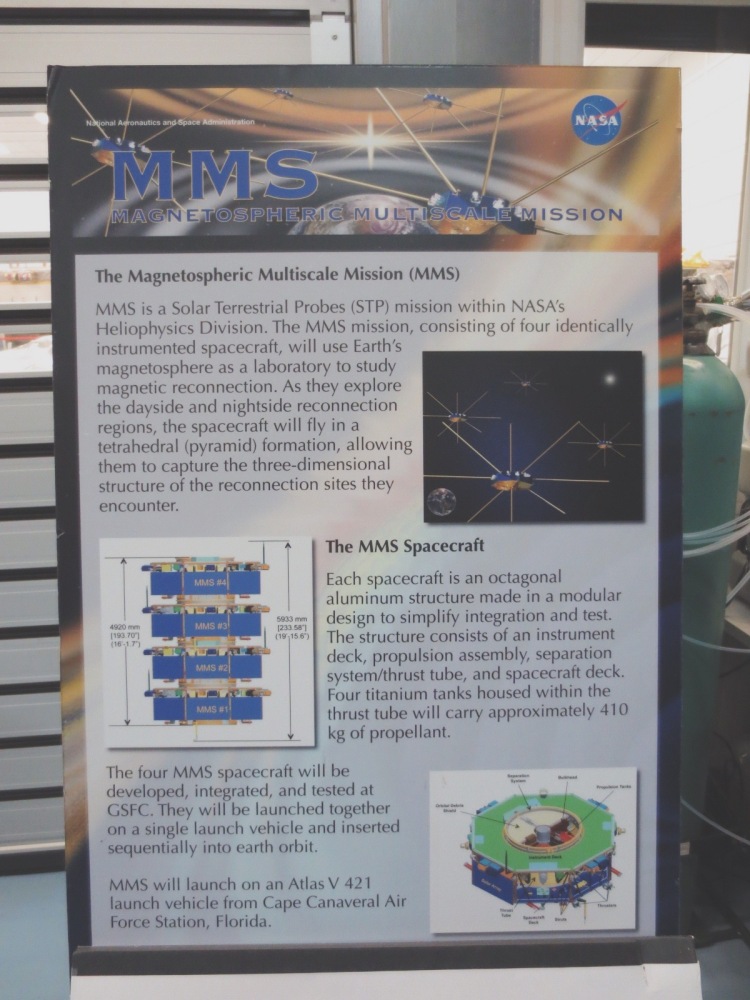 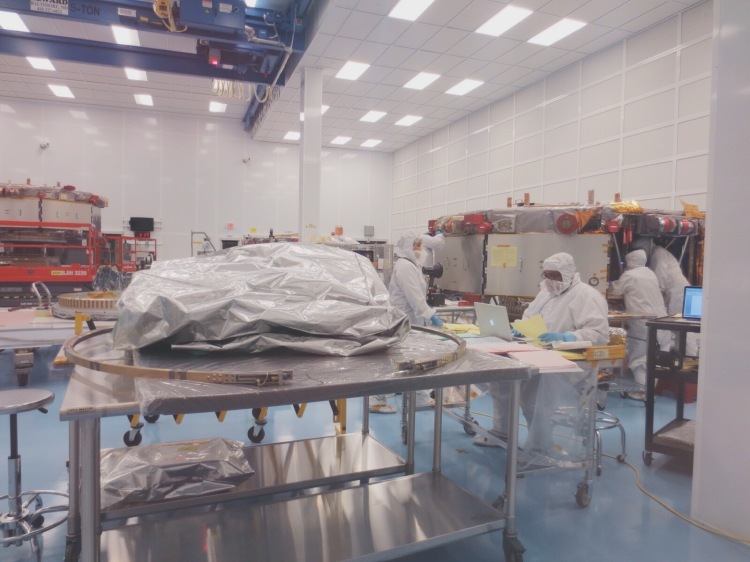 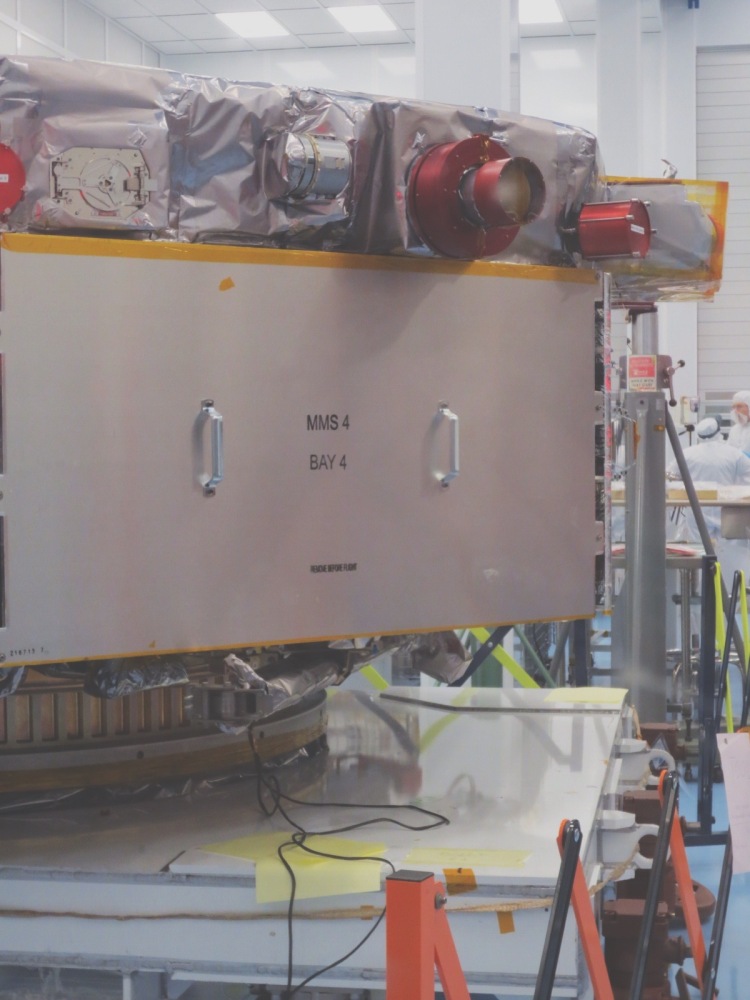 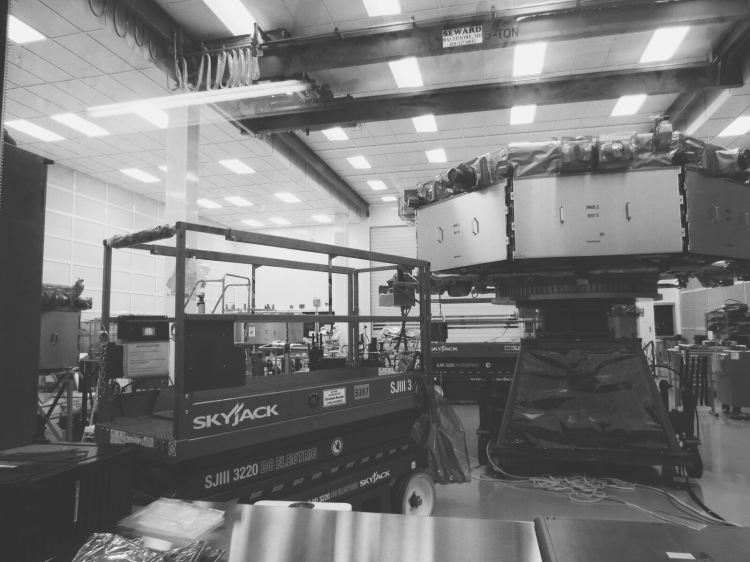 This amazing 1/28th scale model was in the room where we ate lunch! SO cool!

See this model? We were the first NASA Social group to EVER be given tour access to the real life Magnetic Test Facility, which tests how the spacecraft will react to magnetic fields in space. We were given demonstrations and it was really cool to see it – the entire thing is HUGE! It looks like an awesome Stargate portal, haha! 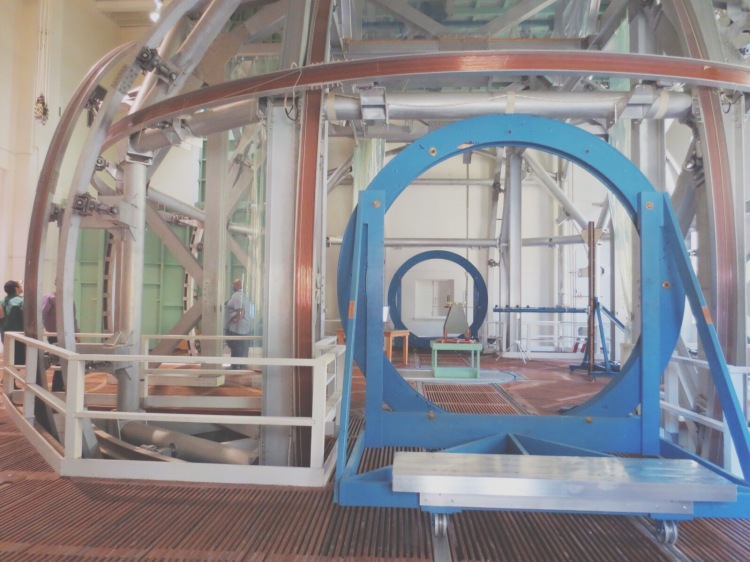 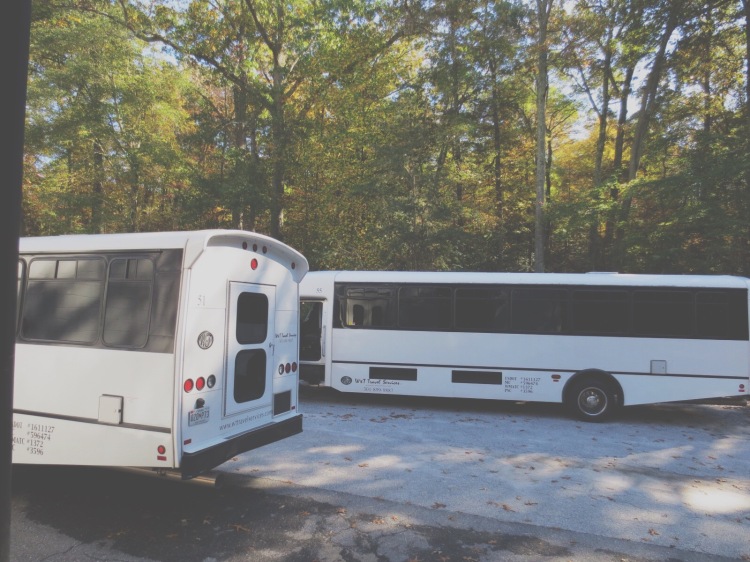 Overall the trip was one of the best mini-vacations I’ve ever taken! I’m super thankful that I was not only given the opportunity, but then able to finagle it with just 2 weeks notice with my school and work schedule being what they are. It was such a humbling experience to witness something that’s going to shape and affect how we move forward in our technology and space knowledge, and I had such a fantastic time experiencing everything! Who knows – maybe someday I can return and visit again! 😀

For more information on MMS, I’d highly recommend the official website.  Details on the actual spacecraft that we saw being inspected and finalized can be found here.  You can also follow NASA’s MMS Mission Official Twitter here – regular updates, yay!