I’ve gotten lots of questions from friends about what I eat the most, or where I shop the most. I tend to visit several stores for different things (because I am extra), BUT I figured an easy way to recommend stuff would be by store!

Trader Joe’s has been one of my favorite stores for years. I worked there for awhile when I lived in Boston, and it was a really great company and part-time job – and since then, I’ve frequented it as one of my most regularly visited stores in every place I’ve lived!

When describing Trader Joe’s to people, I try explaining that it’s similar to Whole Foods in terms of products (lots of organic options, and lots of things you won’t find in other normal grocery stores), but with Wal-Mart pricing (because Whole Foods is expensive af, lol).

Note that if you don’t have one local to you, these foods can be purchased in other places under other brands! So don’t worry if you can’t find a Trader Joe’s nearby – your local grocery store will probably have these, and some of the stuff can be purchased on Amazon, too!

I’ve listed the pricing for my nearby store, but it may vary (so keep that in mind and double check!). I also didn’t really put this list in any particular order – I buy these things once they run out! 😀

As another disclaimer, I do follow more of a “dirty keto” approach to cooking in that if it fits into my carb allowance and macros, I will use it. Some people are a lot more strict, opting only to eat 100% whole or raw ingredients in their diets, so just do whatever works best for yourself! 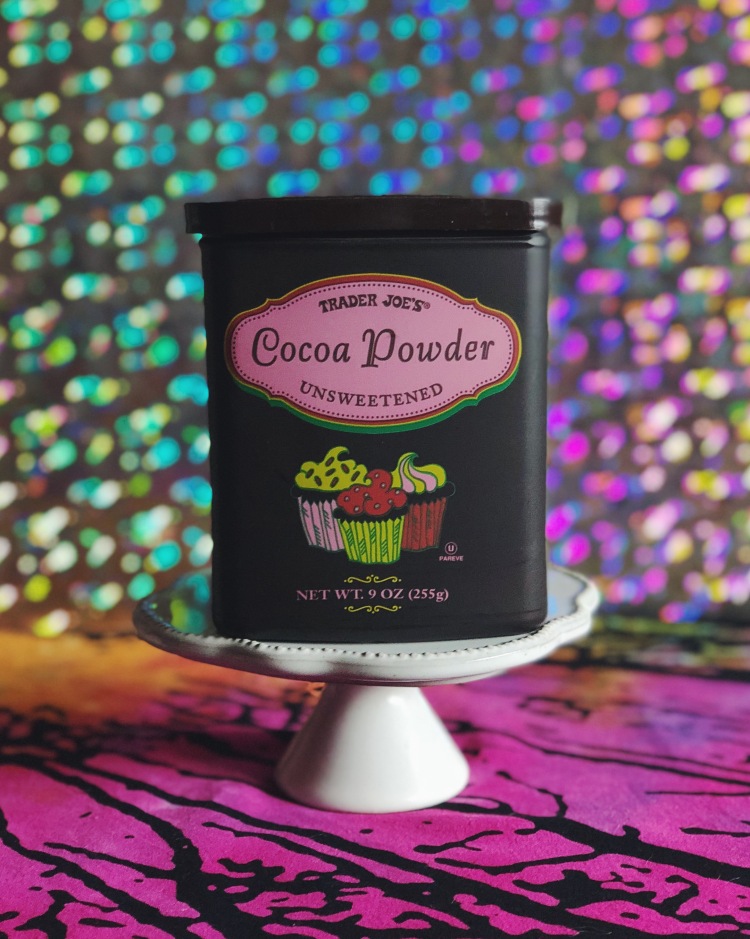 I use this in pretty much all of my chocolate baking or treat-making, and it’s great! It was a nice flavor, no added sugar, and the packaging is super adorable – which I’ll admit is my reasoning for buying this here instead of at any other store. Branding is everything, people! 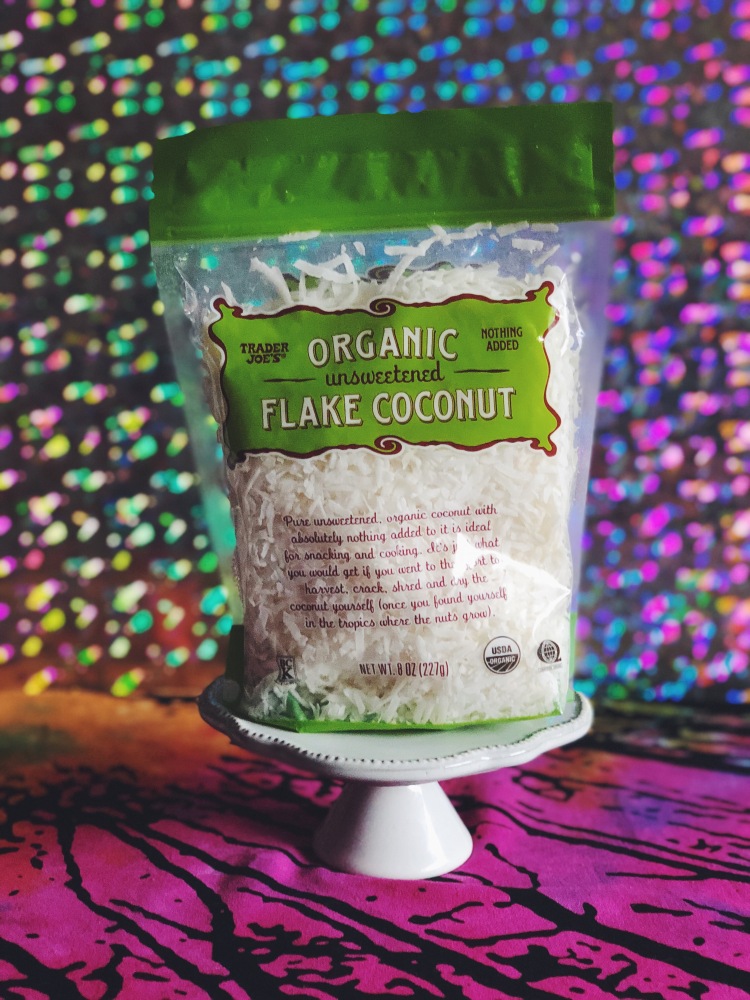 It’s hard sometimes to find flaked coconut without the sugar added, but Trader Joe’s has it covered! This stuff is great to sprinkle on pretty much anything, and you can also toast it easily for a nuttier flavor. I mix this with a bit of coconut oil for my homemade Almond Joy Fat Bombs (recipe for those soon!). 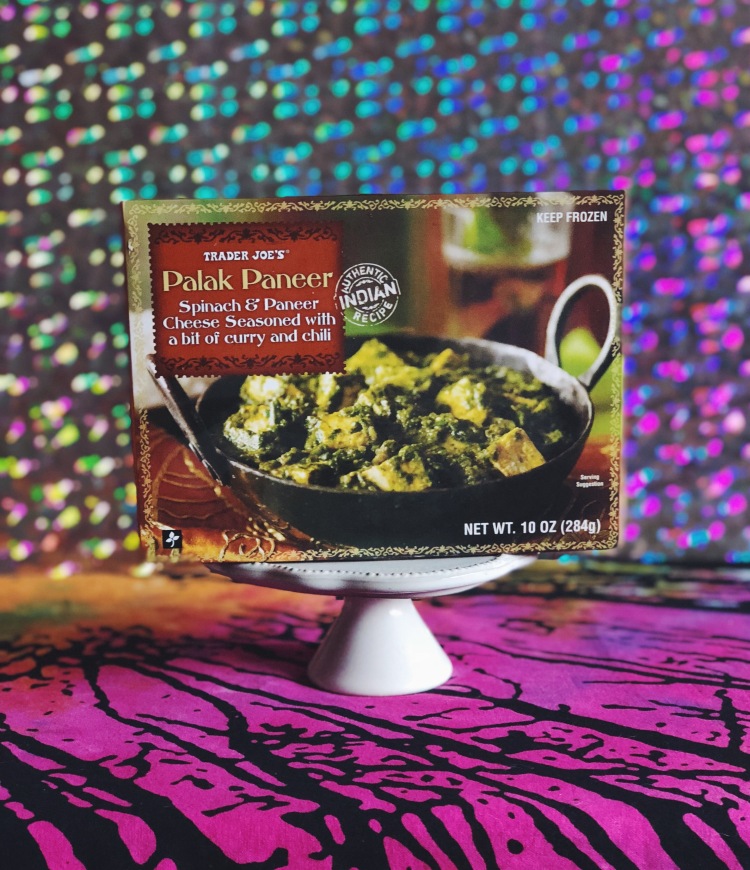 I try to eat as much homecooked food as possible, but sometimes I’m exhausted from a long day at work and just don’t want to be bothered with it. Trader Joe’s has a great assortment of frozen Indian dinners, but most of them are unfortunately off limits to me now. This one is amazing though – and at only 4g net carbs for the entire box, it’s an incredible keto option with the next thing on this list! 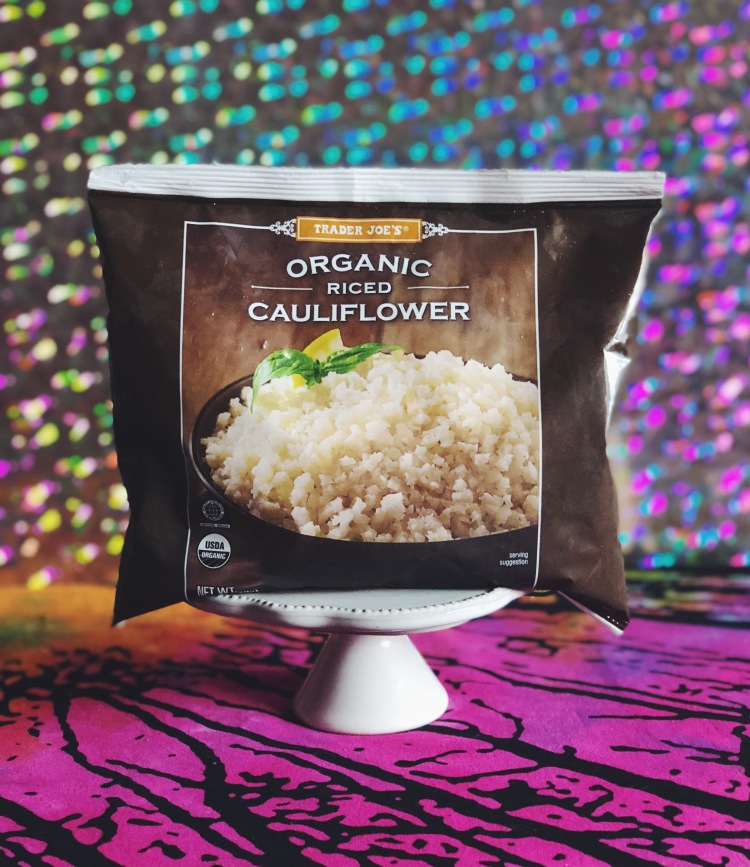 Cauliflower is something the keto community is really, really into – and I’ll admit that it does a pretty decent job of acting as a substitute to a lot of things I can no longer have (rice, potatoes, etc). It smells a little funny, but if you add some butter & garlic, salt and seasonings, it’s pretty good! Plus, when you top it with the Palak Paneer dinner above, it’s amazing. One of my favorite cheap, quick & easy dinners when I’m not really feeling like cooking! 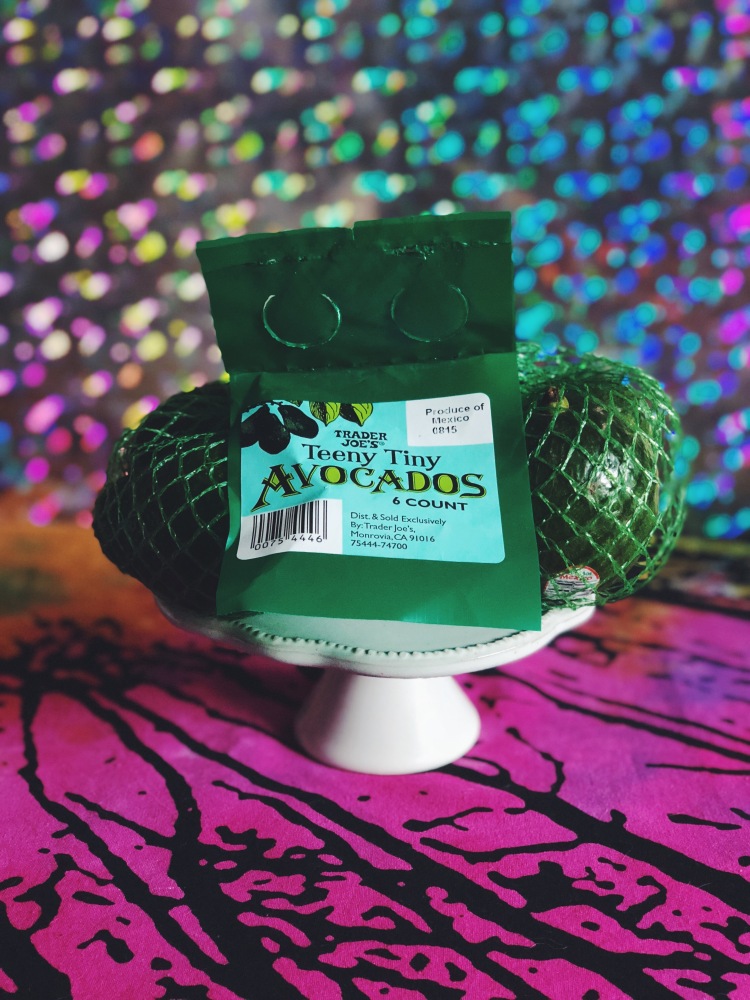 Avocados are a huge keto staple and I loooove them! Trader Joe’s sells a variety of avocados, but the teeny tiny ones are my favorite. You can buy a bag of 6 for $3, which is a great deal when some grocery stores charge over $1 for one! The larger avocados in bags are only $1-2 more at Trader Joe’s, too, so if the teeny ones aren’t your thing, you have options! 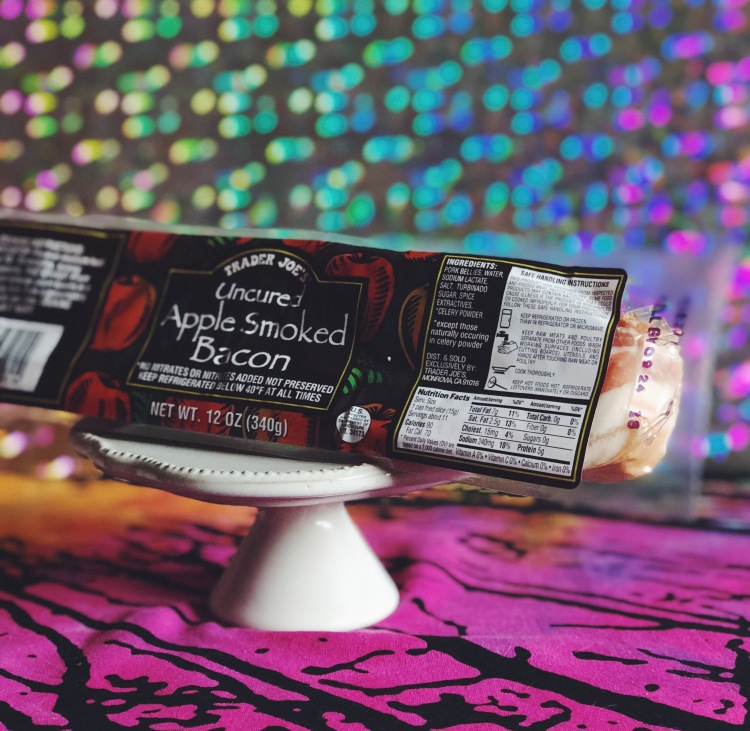 This bacon is SO FREAKING GOOD! I know that $5 for a pound of bacon is a bit steep – and I agree with you, trust me – but for certain recipes, fancy bacon is the way to go. For normal things like jalapeno wrapping, I’ll use a cheaper kind from another store, but when you really want a treat – get this. It’s so, so good! 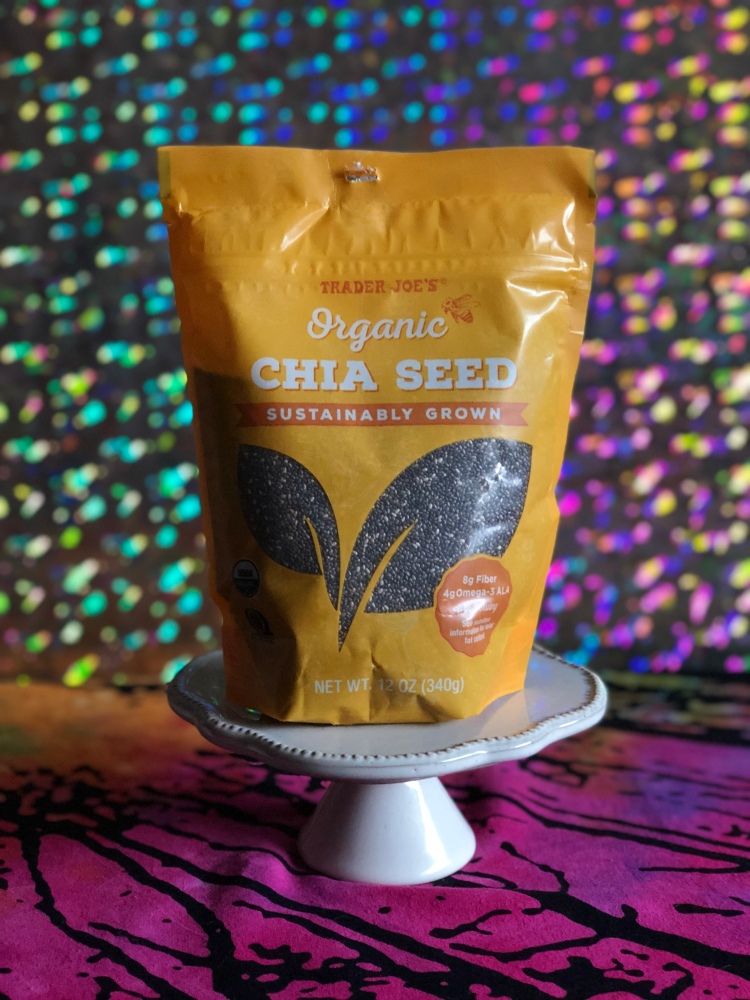 Chia seeds are a nutritional powerhouse – they have a ton of fiber and omega-3s, and you only need 2 tbsp to make a pretty decent sized batch of chia pudding. I also love adding these to fat bombs for fiber & crunch, or sprinkles on top of salads or anything else, really. They don’t have any flavor, and can be used to thicken sauces and smoothies, too! 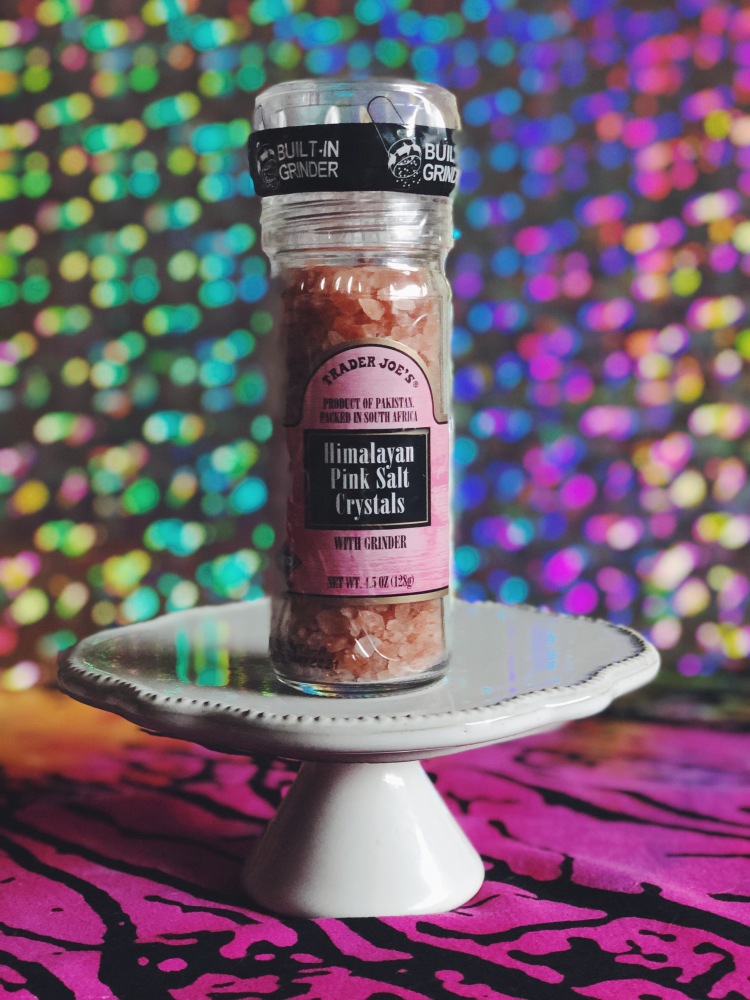 One of the most important parts of the keto diet is making sure that you’re getting enough nutrients and minerals from what you’re eating (and not missing them from the stuff you’re not). A lot of people experience an electrolyte imbalance when they first switch over, and salt helps – and this salt specifically has a lot of health benefits! Plus it’s cute (pink!), inexpensive, and you can grind it yourself! 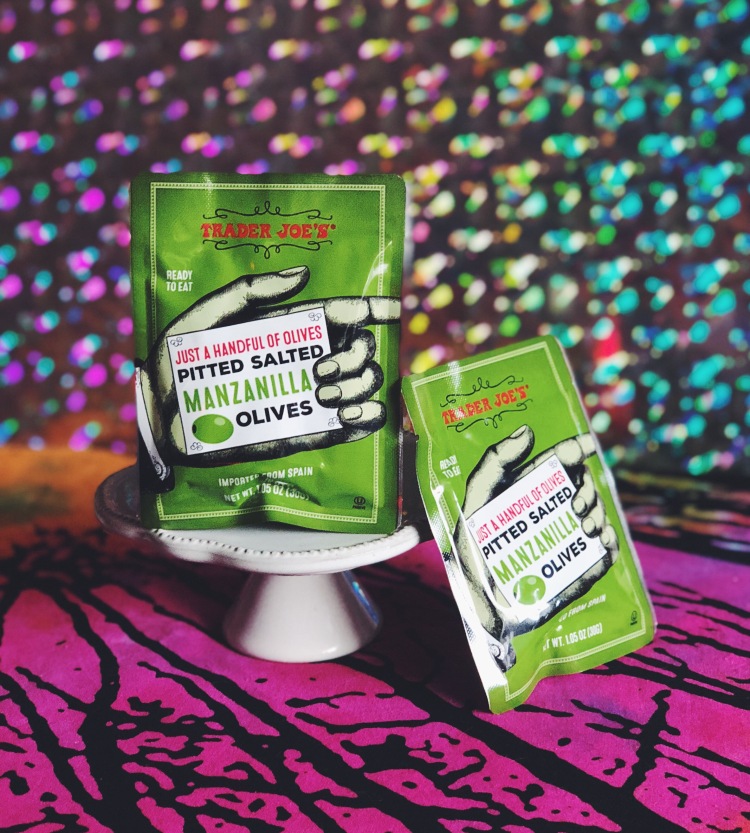 Sometimes you just need a quick, salty snack – and these olives do the trick, and also give you a pretty decent amount of fat with 5g grams per package! They’re great for on-the-go, and pretty tasty (if you like green manzanilla olives!). Like all olives, these do have a lot of sodium, so remember to drink enough water consistently – which is an important part of keto in general! 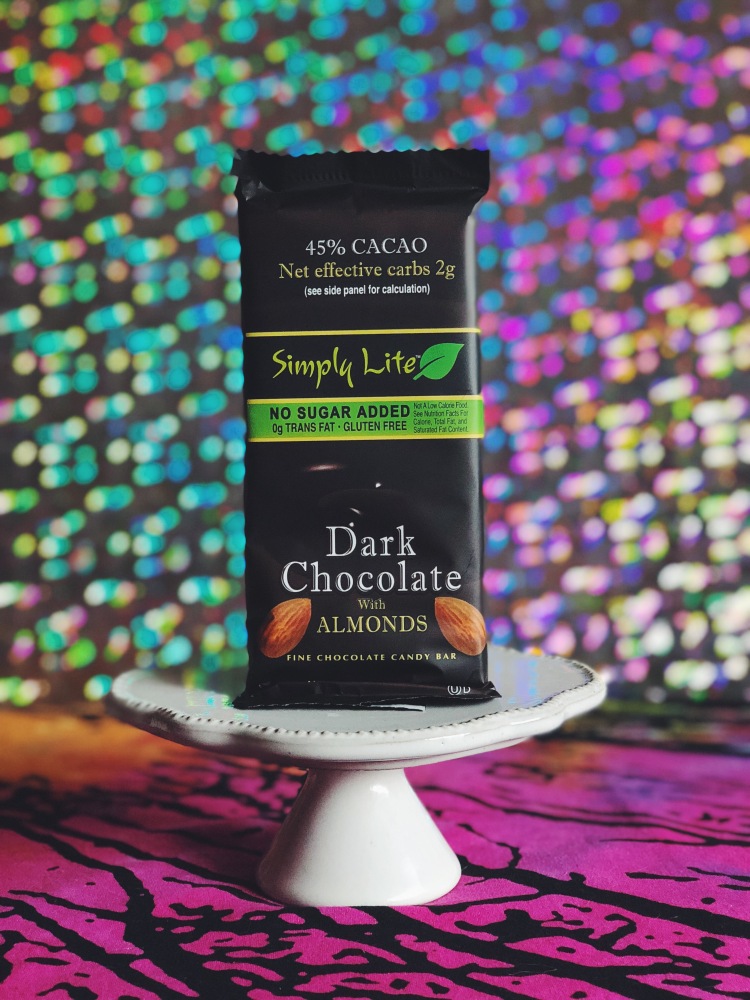 This is one of those dirty keto items on the list – but one of the things I wouldn’t be happy without! It uses sugar alcohols for sweetening (instead of normal sugar!), so a single serving of 3 squares – which is a pretty good amount of chocolate, and I typically eat 1 square – is only 2g net carbs. My one single gripe with these is that not every square has an almond – which is a devastating blow to my crunchers when the craving strikes! 😛

What are your favorite items from Trader Joe’s? Have you tried any of the ones here? I’ll have another post soon on my general basic keto staples (from any store!), so stay tuned. 🙂