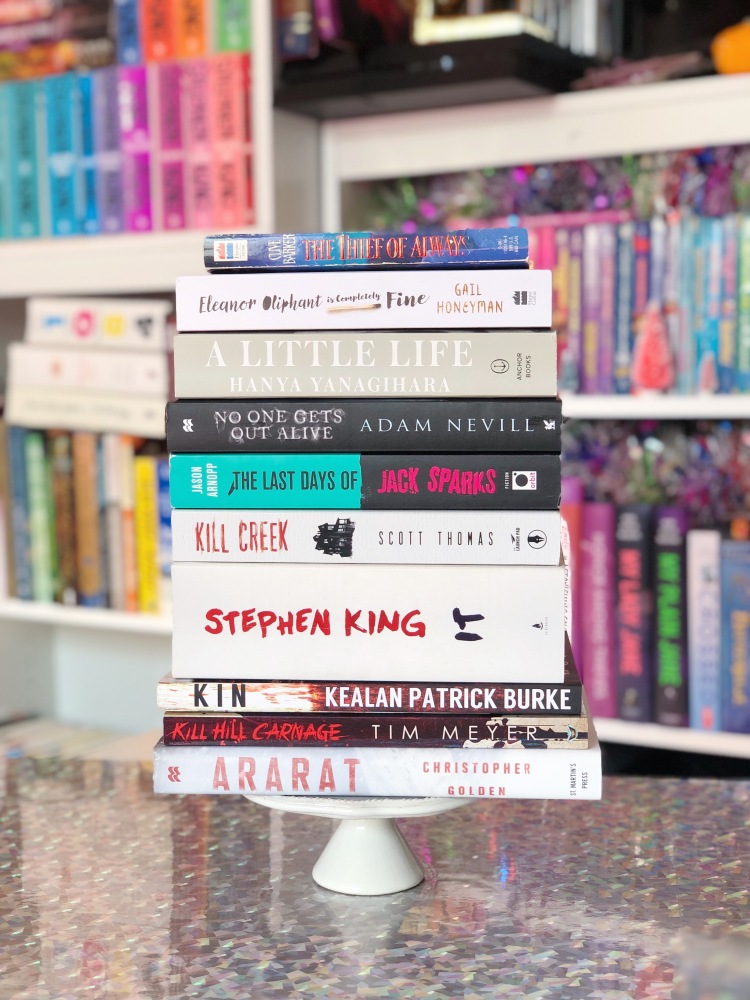 I meant to share this list last month but life got ahead of itself (again), or I guess, ahead of me, lol. Because of this, one of the books here is actually one I’ve now read – the biggest of them all, even!! I started with a bang!

1) THE THIEF OF ALWAYS by Clive Barker

Master storyteller and bestselling novelist Clive Barker creates an enchanting tale for both children and adults to cherish and retell. The Thief of Always tells the haunting story of Harvey, a bright 10-year-old who is suffering from the winter doldrums, and of a creature who takes him to a place where every day is filled with fun, and Christmas comes every night.

No one’s ever told Eleanor that life should be better than fine.

Meet Eleanor Oliphant: She struggles with appropriate social skills and tends to say exactly what she’s thinking. Nothing is missing in her carefully timetabled life of avoiding social interactions, where weekends are punctuated by frozen pizza, vodka, and phone chats with Mummy.

But everything changes when Eleanor meets Raymond, the bumbling and deeply unhygienic IT guy from her office. When she and Raymond together save Sammy, an elderly gentleman who has fallen on the sidewalk, the three become the kinds of friends who rescue one another from the lives of isolation they have each been living. And it is Raymond’s big heart that will ultimately help Eleanor find the way to repair her own profoundly damaged one.

Soon to be a major motion picture produced by Reese Witherspoon, Eleanor Oliphant Is Completely Fine is the smart, warm, and uplifting story of an out-of-the-ordinary heroine whose deadpan weirdness and unconscious wit make for an irresistible journey as she realizes. . .

The only way to survive is to open your heart.

3) A LITTLE LIFE by Hanya Yanagihara

When four classmates from a small Massachusetts college move to New York to make their way, they’re broke, adrift, and buoyed only by their friendship and ambition. There is kind, handsome Willem, an aspiring actor; JB, a quick-witted, sometimes cruel Brooklyn-born painter seeking entry to the art world; Malcolm, a frustrated architect at a prominent firm; and withdrawn, brilliant, enigmatic Jude, who serves as their center of gravity.

Over the decades, their relationships deepen and darken, tinged by addiction, success, and pride. Yet their greatest challenge, each comes to realize, is Jude himself, by midlife a terrifyingly talented litigator yet an increasingly broken man, his mind and body scarred by an unspeakable childhood, and haunted by what he fears is a degree of trauma that he’ll not only be unable to overcome—but that will define his life forever.

4) NO ONE GETS OUT ALIVE by Adam Nevill

Darkness lives within …Cash-strapped, working for agencies and living in shared accommodation, Stephanie Booth feels she can fall no further. So when she takes a new room at the right price, she believes her luck has finally turned. But 82 Edgware Road is not what it appears to be. It’s not only the eerie atmosphere of the vast, neglected house, or the disturbing attitude of her new landlord, Knacker McGuire, that makes her uneasy – it’s the whispers behind the fireplace, the scratching beneath floors, the footsteps in the dark, and the young women weeping in neighbouring rooms. And when Knacker’s cousin Fergal arrives, the danger goes vertical. But this is merely a beginning, a gateway to horrors beyond Stephanie’s worst nightmares. And in a house where no one listens to the screams, will she ever get out alive?

5) THE LAST DAYS OF JACK SPARKS by Jason Arnopp

It was no secret that journalist Jack Sparks had been researching the occult for his new book. No stranger to controversy, he’d already triggered a furious Twitter storm by mocking an exorcism he witnessed.

Then there was that video: forty seconds of chilling footage that Jack repeatedly claimed was not of his making, yet was posted from his own YouTube account.

Nobody knew what happened to Jack in the days that followed – until now.

At the end of a dark prairie road, nearly forgotten in the Kansas countryside, lies the Finch House. For years it has perched empty, abandoned, and overgrown–but soon the door will be opened for the first time in many decades. But something waits, lurking in the shadows, anxious to meet its new guests.

When best-selling horror author Sam McGarver is invited to spend Halloween night in one of the country’s most infamous haunted houses, he reluctantly agrees. At least he won’t be alone; joining him are three other masters of the macabre, writers who have helped shape modern horror. But what begins as a simple publicity stunt soon becomes a fight for survival–the entity they have awakened will follow them, torment them, threatening to make them part of the bloody legacy of Kill Creek.

7) IT by Stephen King

It’s a small city, a place as hauntingly familiar as your own hometown. Only in Derry the haunting is real …

They were seven teenagers when they first stumbled upon the horror. Now they are grown-up men and women who have gone out into the big world to gain success and happiness. But none of them can withstand the force that has drawn them back to Derry to face the nightmare without an end, and the evil without a name.

(Update: I finished this one last month!!)

In the spirit of such iconic horror classics as The Texas Chainsaw Massacre and Deliverance, Kin begins at the end and studies the possible aftermath for the survivors of such traumas upon their return to the real world — the guilt, the grief, the thirst for revenge — and sets them on an unthinkable journey… back into the heart of darkness.

In 1991, hell was unleashed upon Saint Christopher’s Summer Camp for Kids. The killers left behind piles of bodies and rivers of blood. Some say a family of inbred cannibals was responsible. A masked psychopath with a butcher’s knife is another popular theory. Some still believe a camp counselor lost his mind and went crazy on everyone with an axe. But there’s also the mysterious, derelict factory that sits nearby, atop Kill Hill. A place where urban legends are manufactured, the grotesque and bizarre.

Twenty-five years later, the factory on Kill Hill is still said to be operational, but no one can get near it. It’s safely guarded along with the secrets within. But there are a few loose strings and hitman Frank Harmon has been sent to tie them up. His kill list is short, but the night is long and full of unspeakable horrors. With the help of a few college students on an impromptu camping adventure, Frank must contain the mess at Kill Hill before it spreads to the neighboring towns. Before it infects the entire country. Before it invades the entire world.
From the fantastical, high-octane mind of Tim Meyer, author of Sharkwater Beach and In the House of Mirrors, comes his most frightening tale yet! Summer camp this year is at your own risk.

When a newly engaged couple climbs Mount Ararat in Turkey, an avalanche forces them to seek shelter inside a massive cave uncovered by the snow fall. The cave is actually an ancient, buried ship that many quickly come to believe is really Noah’s Ark. When a team of scholars, archaeologists, and filmmakers make it inside the ark for the first time, they discover an elaborate coffin in its recesses. The artifact tempts their professional curiosity; so they break it open. Inside, they find an ugly, misshapen cadaver—not the holy man that they expected, a hideous creature with horns. A massive blizzard blows in, trapping them in that cave thousands of meters up the side of a remote mountain…but they are not alone.