Anyone who knows me knows that my love of color runs deep – but they may not know just how far back it goes. I was born in the late 80s, and as a child growing up in the 90s, I was privy to an incredible amount of things very specific to the time – from inflatable chairs and see-through corded bedroom phones, to Nickelodeon (SNICK!) and my Giga Pet, I am a 90s child through and through. There isn’t much else that makes me as nostalgic as 90s memorabilia, and Lisa Frank’s aesthetic has helped form and shape who I am as a person today – loud, colorful, and probably kind of abrasive if those aren’t the sort of qualities you’re into. 😉

Lisa Frank has been making a comeback in everything from bedding to clothing recently (which I LOVE!), and I’ve been ecstatic to see some of my personal favorites from my childhood school notebooks and folders being imprinted onto everyday items that I can purchase now that I’ve grown up. When I saw these tarot card designs created by Ariel Hart online awhile back, I was floored by the vibrancy and all the old characters from my childhood displayed across the Major Arcana. I did a quick search online but came up empty-handed – I could find the images, but I couldn’t figure out where to buy them, and an at-home print job didn’t seem to offer the quality I’d want from a tarot deck. I looked into a few other options for somehow making them myself, but eventually forgot about it and moved on, resigning myself to a future without these gorgeous cards in my possession… or so I thought!

Fast forward a few months to my birthday, a friend of mine became the literal Angel of Giftgiving when she handed me a birthday bag and I opened up to find my very own Lisa Frank Major Arcana tarot deck!! It was completely out of nowhere – I had no idea she’d been planning to get them or had hunted them down for me, and I was super touched by the thoughtfulness that went into the gesture. It was such a perfect gift – she knows me so well, and knew exactly what I’d love!

Since then, I’ve added these cards to what I like to call my Frankendeck, which is combined out of a few others. Deck combining isn’t something a lot of other tarot readers I’ve met really do, but tarot is all about finding what works for you and being true to yourself – so find what works, and go for it! Don’t let anyone tell you that rainbow cards won’t produce results, ’cause I’ve had some of the best and most accurate self-readings from my Frankendeck. 😀

I’ve shared photos of my Frankendeck (which is currently comprised of these, plus a holographic prism deck that I’ll be reviewing here soon!), and each time I do, I get a bunch of messages and comments from friends interested in buying their own. So much so that I dug into my old bookmarks from when I was looking into ways of creating them myself, wrote up some simple instructions, and passed them along – then decided to share it here, too, along with these beautiful deck photos!

DIY Your Own Lisa Frank Tarot Deck (Major Arcana ONLY!)

I’ll never get over my love of bright colors, wild patterns, and happy animals – and I love that I have a tarot deck so reflective of my personality to use. It’s as colorful as I am! 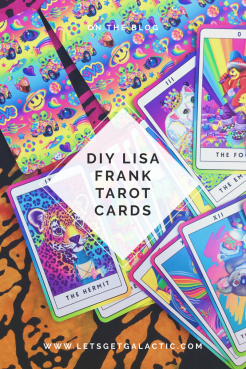