This is my second series from Amazon, with the first being their science fiction series, Forward. I liked that one a bit more than this, but there were some good shorts here and a couple women in horror authors I already loved, like Jennifer McMahon & Joyce Carol Oates.

“Don’t believe what they say. There really is something to be afraid of in the dark. You’ll find it in a quiet motel in the middle of nowhere, on the other side of an attic door, under the bed when the lights go out, and in your own imaginings when your mind starts playing tricks. Whatever your fears may be, the nightmares begin here.”

The series is 7 books long, and each of them are pretty short in length – more your standard short story size than an actual book, but Goodreads lists them as individuals rather than a collection, oddly!

I’ve written little mini-reviews for each of the stories below, so check them out & if you’ve read the collection, share your own favs in the comments! 🙂 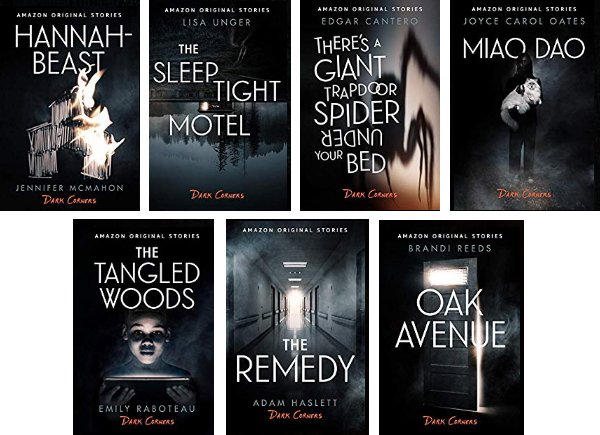 The fate of a lonely girl becomes part of a town’s shameful secret history in Thriller Award winner Jennifer McMahon’s terrifying story of guilt, retribution, and one tragic Halloween night.

Thirty-four years ago, on October 31, poor Hannah Talbott took part in a scavenger hunt gone violently wrong. The mean girls made sure of it. To this day, for a haunted local mother, the most unsettling Halloween costume of all is an urban legend they call Hannah-Beast. It’s a reminder of the past she can’t forget. Especially tonight when it’s come back, so close to home.

I love Jennifer McMahon’s writing, although I’d never read any of her short fiction before. This was probably my favorite story in the series, and I really liked the ending!

2) THE SLEEP TIGHT MOTEL by Lisa Unger (Buy it here!)

A woman on the run finds refuge in a motel at the edge of the woods, with plenty of vacancies. Check in for the night with New York Times bestselling author Lisa Unger.

Eve has a fake ID, a .38, and a violent lover receding in the rearview mirror. He’ll never find her at the isolated motel, and its kindly manager is happy to ease her fears. But if Eve is the only guest, whom does she keep hearing on the other side of the wall? Eve won’t get a good night’s rest until she finds out.

I saw a few bad reviews for this one, which surprises me ’cause I didn’t find it to be that bad at all! I liked the “twist” ending, although I will agree it wasn’t as original as some others I’ve read – but that doesn’t mean it wasn’t entertaining for me to read! I wasn’t familiar with this author before, but based on this, will definitely read more by Lisa Unger in the future.

3) THERE’S A GIANT TRAPDOOR SPIDER UNDER YOUR BED by Edgar Cantero (Buy it here!)

The thrill of a sleepover becomes sheer terror as kids voice their greatest fears into existence in this cheeky, vividly cinematic tale by New York Times bestselling author Edgar Cantero. Lights out.

It’s bad enough that its venom-dripping chelicerae can slice through flesh like warm butter. Worse? It’s right there under the bunk. It’s a fact now. To make it through the night, the children must obey the rules: don’t get out of bed, stay out of the shadows, and don’t wake the beast. But as the threats multiply, so do the rules of survival. And with the safety of dawn still hours away, the fun is just beginning.

I really did not like this, which was super disappointing. I have MEDDLING KIDS by the author, and although I haven’t read it, I’d heard good things, so when I saw that the Amazon DARK CORNERS series had something by Cantero, I was psyched. Potential spoilers below, so read at your own risk!

I get that this short story is told from a kid’s perspective, with all the scares and fun and adventure of a child’s imagination being the driving force behind everything happening. I loved this aspect of the story – I remember being a kid, and getting into wild shenanigans with my little brothers, and some of the stuff we did was super similar to what we read about in the book.

That said, when I was a kid, I didn’t go around talking about how “woke” people were, I didn’t use internet speak/references in actual conversation, and despite being a huge Harry Potter lover since the age of 9, I didn’t litter every other conversation with references to the series. The kids simultaneously felt too old and too young for different aspects of the story, which didn’t help the believability at all. A lot of the dialogue felt unnatural for me – it probably didn’t help that the audiobook is narrated by a woman who I guess believes that little boys all have only one voice, and that one voice can only sound very dumb, oafish, and slow. It drove me bananas! (I did not remove stars for the narration, only for my issues with the actual story.)

There was also this weird moment where I think the author tried to make this more inclusive or, idk, add to the representation somehow in sexual preferences between CHILDREN (???) but it was so hamfisted and poorly done that I literally said “what the fuck?” out loud while listening to the audiobook on my commute home.

The author has writing skills, that much is obvious. I could tell from the way certain things were described that the chops were there. Why they chose to use those skills to write this is a bit beyond me – it honestly feels like a really strange Harry Potter fanfiction, and as someone who has actively written & read HP fanfiction as a kid (DON’T JUDGE ME, I AM WHAT I AM), it wasn’t even the sort of thing I’d have liked as a child.

Last note – and this is probably weird, considering everything else – but I actually did quite enjoy the ending. If this story had less Harry Potter / internet references, nixed the entire love thing, and was just a group of kids fighting off scary stuff in their room, I’d have liked it a lot more.

I will definitely still be reading MEDDLING KIDS because again, the writing ability spoke clearly to me despite the issues I had with the story itself, but I’m a little more wary than I was before.

A girl comes of age with a vengeance—and help from a friend—in a tale of unnerving suspense from National Book Award winner and literary master Joyce Carol Oates.

Bad things have been happening since Mia began to mature. Her dad left. Boys at school can’t keep their hands to themselves. A lecherous stepfather has moved in. Her only refuge is an abandoned lot on her suburban cul-de-sac, crawling with feral felines—one of which follows Mia home. Ghostly white and affectionate, she is Mia’s new companion and—as Mia’s tormenters will soon discover—her fierce protector.

For most of this, I was kind of annoyed by the MC and not super sold on it overall. The ending was fun, but I didn’t need all the repetition that went into the lead up. The MC’s voice was whiny, which was rough because we’re meant to sympathize with her – but in all, I was mostly just irritated. Joyce Carol Oates is an intensely gifted writer, and her writing language is gorgeous, but I just wasn’t super into it here.

5) THE TANGLED WOODS by Emily Raboteau (Buy it here!)

Poison-tongued film critic Reginald Wright is known for his creative insults and intolerance for the garbage culture, insufferable rudeness, and thoughtless racism of predictably common people. Now, against his better judgment, and with a marriage in crisis, he’s attempting a getaway in the Poconos that quickly fulfills his every low expectation. In fact, it’s becoming a nightmare. And that’s just what Reginald needs to wake up.

Wow, I haven’t come across such an unlikable main character in awhile – even counting the last one in this series! Reginald is the worst sort of person, and this whole story was really heavy handed with political & social commentary. I didn’t mind the points being made, but wasn’t really expecting it in such a hamfisted way.

6) THE REMEDY by Adam Haslett (Buy it here!)

He’s a man with a body under siege—and the willingness to proceed with a cure so miraculous all one can do is gasp—in this chilling story by New York Times bestselling author Adam Haslett.

After years of traditional treatments and therapies, Derrick still suffers from pain ineluctable enough that it has become his identity. Then he hears of an exclusive, very private New York clinic that promises relief. It comes highly recommended by a friend. The multisession remedy unfolds as a sensorial wonder that’s so illuminating it’s enough to bring tears to Derrick’s eyes. It’s all working so well. So unexpectedly well.

The whole series just started going downhill for me, as you can see by the last couple of reviews – and THE REMEDY is no different. I was not expecting this ending, and was really put off by it. The entire story leading up to that point felt like it was cheapened by the ending, and I didn’t enjoy the message conveyed by the story itself – which sucks, ’cause the beginning & middle weren’t so bad.

A young wife and mother—new to this town and to its secrets—learns just how much she doesn’t know in this tingly tale of all the things hiding in the dark at the top of the stairs, from bestselling author Brandi Reeds.

While renovating her Victorian home, Ana Clementine finds an ornate door buried under forty years of earth. Once she restores it to the attic, she starts hearing whispers, her loving husband becomes a stranger, and her baby daughter learns a chilling new word. Maybe Ana has unlocked the house’s secrets. Or maybe she’s becoming just a little unhinged herself.

Again, another miss for me in the series. This one felt too long, and like a majority of it was filler. I didn’t like any of the characters, and was moreso annoyed by all the dialogue throughout. The story felt played out, like it’d been done – better – several times before.

Overall, this was a bit of a let down considering how excited I was about the horror series from Amazon. The sci-fi one was a lot better in my opinion, with stories that felt more developed and emotional than these. I’m not a huge fan of “reality horror” (unless I’m in the middle of a Law and Order: SVU marathon, y’know?) unless done really well, and while some of these felt like they belonged to that subgenre, I wasn’t impressed with any of the stories or writing enough to want more.

If you loved any of these, let me know! I’d love to talk about it – maybe I missed something somewhere!