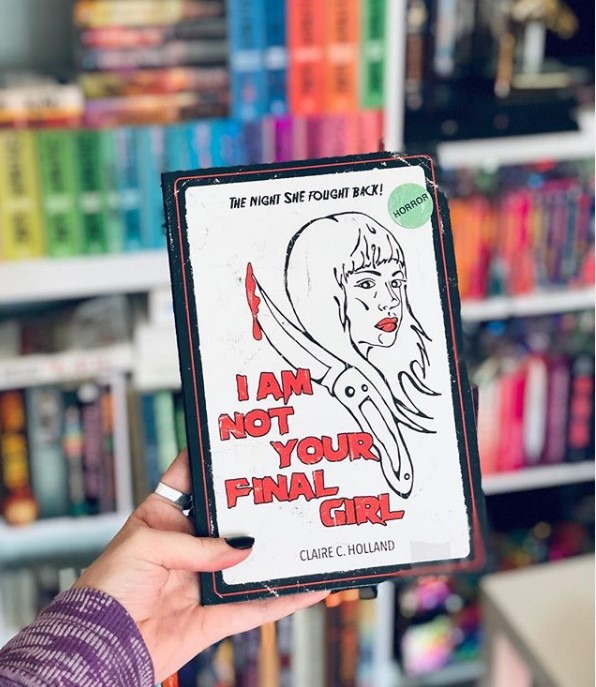 Title: I Am Not Your Final Girl

This review was first featured on the Night Worms blog, which has a team of amazing people involved with promoting & reviewing horror books (of which I am happy to be a part!). Check it out here!

“If I could float up above my own tired / bones, change my mother’s-hands into talons,  / rip our the root of this unrest, would I?”

This is one of my all-time favorite books, and I’m shocked that I don’t already have a full review posted somewhere. I thought I’d written one when I read this originally early last year, but apparently not! Which is a tragedy, because this is one that you really shouldn’t miss – even if you wouldn’t consider yourself someone to be a fan of “poetry” as a genre.

This is a collection of 40 poems by author Claire C. Holland, and I believe it’s her debut collection – at least, from what I could find online. This is bananas to me, because the strength of her writing would easily lead the reader to believe she’s been publishing for years! (And maybe she has, just probably not in a singular collected format – so I am very glad to have this book now ‘cause WOW!)

When I read this book for the first time, I had to take little breaks now and again because of how much a specific line or poem spoke to me. It’s incredible just how good this collection is – in content, in writing, in the ability to convey the strength, alongside the helplessness, that so many of us women feel every day.

“I’d rather arm myself / in blood than be a pretty statue / to stare at.”

The final girl trope is one we see a lot in the horror genre – after everything, a sole survivor stands alone after defeating the Big Bad. While not every woman featured in this collection is one that survives her ordeal, the book as a whole is an ode to the struggles that those women – and women today – share.

Each of the 40 poems is from the perspective of a different fictional character – women you’ll recognize and be familiar with if you’re a fan of horror cinema. The collection is split into four sections, with each section having a specific theme – which I really loved. Assault, Possession, Destruction, and Transformation make up the different themes, and I thought this was a genius way of both separating and connecting the different women and their stories.

Holland’s movie knowledge in this collection is honestly nothing short of amazing. Focusing on a single character from movies all across the horror / dark genre, she features popular favorites like Rosemary from Rosemary’s Baby, while being sure to also include newer characters like Thomasin from 2015’s THE VVITCH.

“You might say things didn’t end well, / but I had fun. Ask anyone.”

I’m not even going to lie and pretend I’ve seen all of these movies or knew every single character – I’m an avid horror fan, but probably haven’t seen quite as many older movies as I should. For some reason I seem to have a huge gap – I love super, super old (like, black & white) horror movies, and I love really recent (90s to current) horror movies, but stuff in between there for me is kinda of fuzzy, with only a few popular standouts being ones I’ve seen. This is something I actually want to work on, and I love that Holland  lists each poem’s movie inspiration with the character name titles – very cool organizationally, and wonderful for me to use as a starting point with what to watch!

In regards to actual poem content, I was just as impressed with the poems as I was initially with the titling, sectioning, and book cover (which I haven’t mentioned so far – but come on, how cool is that cover?? I love it so much!) as I was with Holland’s actual writing ability.

Rather than re-tell each story in poem format exactly, or give a recap of a movie we’ve seen before, each poem focuses on a specific aspect or character perspective that gives the women in their stories the power and voice to speak. Imagine that the woman from each movie were to, after everything was said and done, sit down and write a poem that was as relevant to her situation as it is to some of our own today as women in this country, and this world.

“They must be spoken aloud, over and over again, like a melody or a mantra that maybe – if we say it enough, if we refuse to shut up – will become a part of our collective consciousness. Apart we can no longer ignore, or call urban myth.”

Holland’s introduction is an honest and raw almost call-to-action about the strength of being a woman, and how much it sometimes sucks for us in this day and age. The pressure of what it means to be a “woman” is sometimes too much to bear – from being told how we should look, act, dress, or talk, to being terrified of walking to our cars alone in the dark at night. The bond we share with each other – and with the final girls on these pages – is one that can only be strengthened by coming together, being vocal about what’s wrong, supporting one another, and fighting back. I loved this intro – it was an incredible start to an amazing collection, and I want to be best friends with the author.

Don’t miss this one. Whether you’re a woman or not, I guarantee there’s something to be found within these pages that you can relate to, at least in some way.

One thought on “Book Review – I Am Not Your Final Girl by Claire C. Holland”